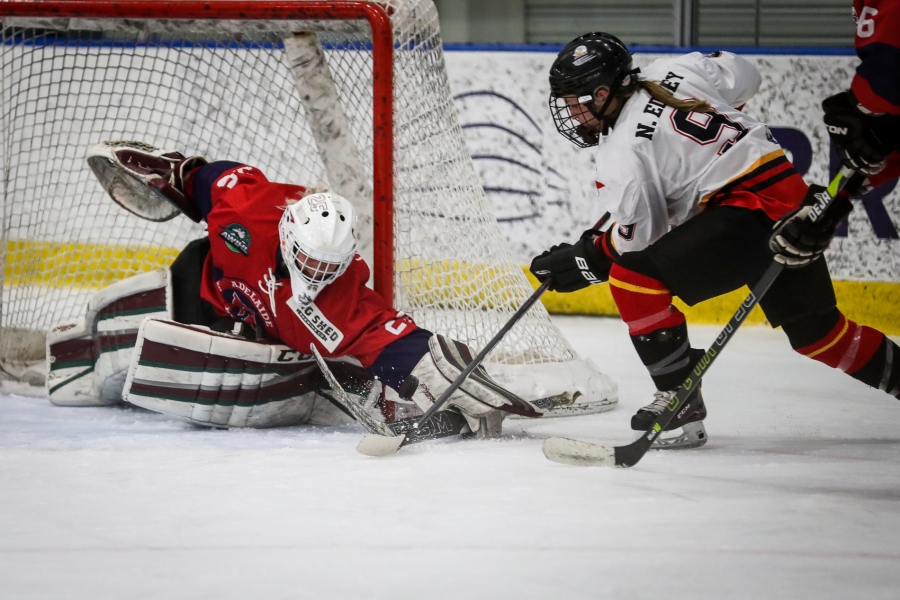 The Sydney Sirens have defeated the Adelaide Rush 3-0 to win their second Joan McKowen trophy as AWIHL champions. Tina Girdler (Sydney) and Michelle Coonan (Adelaide) went without rest, backing up their semi-final wins from the previous day with a start in the grand final.

The matchup saw the two best possession teams in the league facing off against each other with very different philosophies. Sydney was by far the highest scoring team, and Adelaide owned the staunchest defense.

Sydney applied pressure on Adelaide immediately after the faceoff, entering the Adelaide zone and setting up shop. Natasha Farrier was able to block a shot at the blueline and raced up the ice in a one-on-one situation, but a good stick from defender Sarah Edney broke up the play before a shot could be made.

Sydney would head to their first powerplay after Tash Farrier was sent to the penalty box for a dubious call of charging. The Sirens would capitalise seconds later. Sharna Godfrey found Sarah Edney in the slot. Coonan did well to save the first shot, but Stephanie Cochrane slid the rebound under Coonan giving Sydney a 1-0 lead at 13:49. It was Sydney’s seventh powerplay goal from eight opportunities over the weekend (87.5% conversion rate).

Adelaide maintained zone pressure following the goal but were left unrewarded for their efforts. The Sirens did well blocking shots and keeping play to the outside. Ayris generated a half-chance from a tight angle that Girdler was equal to. Then their momentum was stalled by another penalty when Candice Mitchell was called for hooking.

The Rush’s box formation on the penalty kill bent but did not break, Coonan stepping up with some key saves to keep it a one goal game. With the penalty killed, Sydney continued to apply pressure but were once again flummoxed by Coonan. Nadine Edney and Kayla Nielsen were the two top scorers in the AWIHL regular season and had an excellent two-on-one opportunity. Edney made a beautiful backhand saucer pass to Nielsen who was stoned by Coonan. Despite jamming at the rebound the puck stayed out of the net.

Two Adelaide penalties in quick succession sent the Sirens to a five-on-three powerplay. Once again, Farrier went to the box on a puzzling call of ‘body-checking’, a play in which she merely appeared to stand her ground. Regardless of protests, the Rush were shorthanded by two players.

With their captain and MVP both in the box, Adelaide were always going to struggle to kill off the penalty. Sydney won the ensuing faceoff and the puck never left the zone. 26 seconds later, Amelia Matheson collected a pass just inside the blueline, took a couple of strides, and blasted a clapper past a screened Coonan’s glove. 2-0 Sydney at 1:46, Matheson with the goal, assists to Ava Calabria and Chloe Walker.

Sydney dominated the shot count, due in no small part to the powerplay count being 4-1 in their favour. The Sirens more than doubled up the Rush in shots with 13-6, thus giving them a shot-share of 68%.

Adelaide were unable to score on the powerplay to start the period and the game settled into a tightly checking match. Adelaide had a good chance after four minutes of play, crashing the net on a rebound opportunity, but Tina Girdler and desperate defense by Sydney ensured the puck didn’t cross the line.

The Rush would have a five-on-three powerplay of their own just over a minute later as Calabria and Nielsen were sent to the box. Sydney players and supporters were equally puzzled with the call.

Sydney showed their championship mettle by taking the play to Adelaide. Then the 5-on-3 powerplay became a 4-on-3 as Rush forward Sasha Lutz was sent to the box for high-sticking. Both teams defended with desperation, battling for every loose puck.

When Mitchell was called for a tripping call, the Sirens went to the powerplay for the sixth time in the game. Adelaide, however, managed to sustain pressure in the Sydney zone. When they lost possession, Kayla Nielsen’s superb breakout pass put Nadine Edney on a breakaway. The star forward deked to her backhand and beat Coonan, but not the goalpost.

After successfully killing the penalty, the Rush would go to the powerplay two more times. Farrier had a great opportunity snuffed out, left unattended at the back post. Sasha Lutz found some space in the slot, but like her team, couldn’t solve the puzzle of putting the puck past Girdler. Despite dominating the shot count in the second period 14-6 (70% shot share), Adelaide still trailed 2-0. The shot share was 51% to Adelaide after 40 minutes of play.

The tight checking of the second period carried over into the third, both teams putting the body on the line to prevent scoring chances, exemplified by this shot block by Lizzie Aveson on Nielsen.

It was apparent that it was going to take a spectacular play to add to the scoreboard. Nadine Edney came close when she deked past the defender and found herself with a clear shot, but Coonan did well to get out to the top of the crease, stop the initial shot with her pad before diving on the rebound.

Just over a minute later, Sarah Edney collected the puck in the neutral zone, was forced wide by the Rush defenders, but managed to find a gap with an unbelievable shot from a tight angle. 3-0 Sydney, Edney the scorer, Sharna Godfrey with the assist at 10:54.

Adelaide tried to get back into the game, but two penalties to Venus and Farrier once again had them on their heels, desperately needing to kill off a 5-on-3 powerplay to stay in the game. Michelle Coonan was spectacular down the stretch, keeping her team in the contest with some phenomenal saves.

With 14 seconds left on the second penalty, Katherine McOnie went to the box for kneeing, and the game would see brief 4-on-4 action before an abbreviated Rush powerplay. Sasha Lutz created a chance on her own, deking around two Sirens players, but Girdler was in good position to stop the shot and the referee blew the play dead, defusing the danger from the ensuing rebound.

Sydney continued to press, and Coonan had to be sharp to deny a one-timer from the slot with three minutes remaining. Rush chances were limited to rush chances (I make no apologies for this sentence). Farrier saw her shot from the right faceoff circle saved by the mask of Girdler. That would be the final chance for Adelaide, they would not have possession of the puck in the offensive zone for the last minute of the game.

Tina Girdler was kind enough to answer a few questions regarding the game and I am pleased to share her comments.

Two very different games over the weekend, a 22 goal game against Perth, and then a 3-0 game over Adelaide where you limited the Rush to just 23 shots. What adjustments were you able to make as a team between Saturday’s game and the final?

We focused on controlling entries and exits at both ends of the ice, providing support to our puck carriers offensively while defensively stepping up in the neutral zone to reduce scoring chances.

It certainly worked, your team was able to take advantage on special teams with two PP goals and were excellent on the PK. You seemed to get a lot of fan support over the weekend.

Loved the atmosphere in the Icehouse! Sirens fans were amazing – small but mighty in making their presence known and providing us with support both on and off the ice.

What’s next for you? Will you be representing Australia at the worlds?

I’m really excited and honoured to be representing Australia at Worlds this year. We leave next week for training camp in Sweden followed by the tournament itself in Iceland.

Sydney played a complete game and deserved the win in this matchup. Their offense has been terrifyingly good all season, but their defensive effort in this match was just as spectacular. It was the Sirens’ first shutout of the season; what great timing to accomplish the feat.

Adelaide have been the story of the season going from last to second in a single season. For connoisseurs of elite defenses, they have been a joy to watch. All season long they bought in to a stifling defensive system that gave them an eye-popping, league-leading, shot share of 63.5%. That means that Adelaide created almost twice as many chances as they allowed. This season was not a result of luck but the result of excellent players playing an effective system.

The skill on display the entire weekend was beautiful to watch, and no doubt, for young female fans, inspiring. After a chance meeting with Melbourne Ice players Jenelle and Georgia Carson following the match, they both declared that women’s hockey was the winner here, and I wholeheartedly agree.

If you want to watch a replay, the AWIHL broadcast all of the games via their YouTube channel. Please be sure to subscribe. Thanks for helping them reach their goal of 1,000 subscribers prior to the finals!